The recent road traffic death of a man on Queensland's Sunshine Coast has prompted a veteran police officer to write a note thanking the community for the kindness they showed the dying man.

Two cars had collided on the road between Noosa and Eumundi on Sunday, with one of them running off the road and down an embankment.

Eumundi police officer Sergeant Brooke Flood was the first emergency responder to arrive at the crash site and was struck by a scene she had never witnessed in 18 years of policing.

"I came over the hill and there were cars everywhere, parked skew-whiff all over the road and people everywhere who stopped to render assistance," Sgt Flood said.

"It blew me away in the moment; I was in awe of the kindness of people to stop and try and assist."

The crash claimed the life of Jamie Bird, 44, from Brisbane who was killed as he and his family headed to Noosa for the school holidays.

Days after the crash, the officer in charge of the Eumundi Police Station was so moved by what she saw that day that she wrote a heartfelt yet confronting letter of support thanking the community in what is also a timely reminder for the school holidays.

The letter was received by community publication Eumundi Green and has since been shared hundreds of times on social media with widespread support.

In the arms of a stranger

Sgt Flood has spent most of her policing career in country towns but in her two-decade career she has never seen such a cohort of strangers so dedicated to saving another.

As an off-duty doctor attended to Mr Bird, other off-duty emergency personnel and nurses rallied around to help as passers-by, who quickly realised the gravity of the situation, tended to his 13-year-old son who was also in the car.

"They've taken him away from visual sight of the situation and have comforted, supported and looked after him until QAS [ambulance] had arrived," Sgt Flood explained.

"Then there were people who I have no idea what their job is, just all these people came together and worked really hard to try and safe a life."

Sgt Bird was so moved by what she witnessed that she reached out to Mr Bird's family, wanting them to know that he had passed away "loved by complete strangers".

"I can't think there'd be anything worse than passing away, alone with nobody," she said.

"I think it was some relief for the family to know that he was surrounded by people who were doing everything they could to help him."

Queensland has about two road fatalities each week and there have been six fatalities in the last two weeks alone in the Sunshine Coast and Gympie regions. 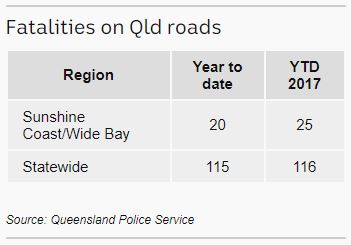 The problem as Sgt Flood explained is that as each new fatality hits the news, it is met with complacency in an increasingly desensitised community.

But if the viral response to her post on social media is any indication, perhaps the officer's confronting, stark reality has finally struck a chord with motorists.

After all, those deaths are not just a statistic but represent someone's mother, father, brother, sister, son, daughter, husband or wife.

"They don't realise how many people are affected [with each fatality]; it can run into the hundreds," she said.

"There's so many people that I've seen first-hand at this traffic crash who would've carried some sort of trauma after seeing this."

Despite being trained for it, attending fatalities is not any easier for emergency services personnel.

"For every fatal traffic crash an emergency service worker attends, they hold the sadness of that with them for the rest of their lives," Sgt Flood said.

"Members of the public who stop and help, they hold that sadness. The families, the friends, there's so many people affected by this."

'It could happen to you'

With more cars set to hit Queensland roads for the school holidays, Sgt Flood is pleading for drivers to avoid distractions such as phones, gadgets, DVD players and noisy children.

"I couldn't imagine what it would be feel like to be responsible for somebody else's death because you were answering a phone call or you turn around to yell at your kids in the back," she said.

"Could you imagine having to deal with that for the rest of your life? That's a reality for a lot of people."

She said it only took a split second for lives to be changed forever.

"I really want people to think about these fatals that occur and know that that could be them," she said.

"I'd travelled that same road just a few hours prior with my children and partner. That could've been us.

"And it doesn't matter how good a driver you are, you can't predict what other dangers you could face."

Mr Bird leaves a wife and three children. The cause of the crash is under investigation.